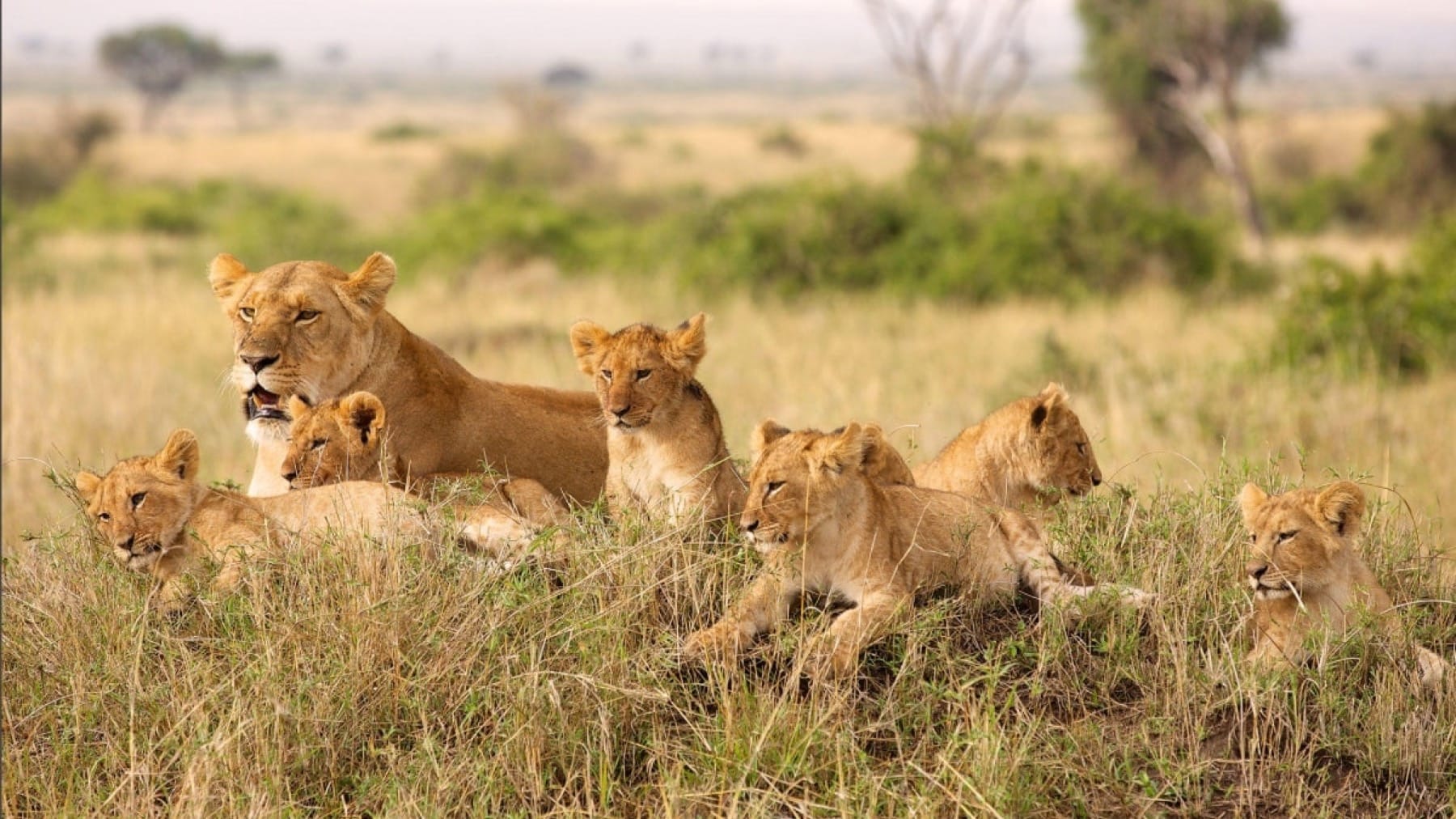 The ultimate guide to your next Okavango Delta Safari

Where to go Popular Okavango Delta Safaris About us

Everything you need to know about your Okavango Delta safari

Welcome to Discover Africa’s Okavango Delta safari guide. Botswana’s world-famous Okavango Delta, also known as the “Jewel of the Kalahari”, could easily be the most pristine oasis in the world. The Okavango River finds its origins in the highlands of Angola, in a catchment area of about 112,000 km2. From here it begins a winding journey of 1,900 km before fanning out into an intricate system of waterways covering 22,000 km of Kalahari sand; a phenomenon that can be observed by astronauts in space. Although the river would have once reached the ocean, today it is swallowed up by a thirsty basin of white Kalahari sand, creating an effect that resembles an outstretched emerald hand, or more correctly referred to by scientists as an “alluvial fan”.

This Botswana Okavango Delta safari adventure will take you to the tip of Africa’s most amazing and unique inland deltas. Travellers have the chance to experience this magical world of islands and waterways from land, air, water - through activities such as game viewing, birdwatching and sighting the elusive Sitatunga antelope. 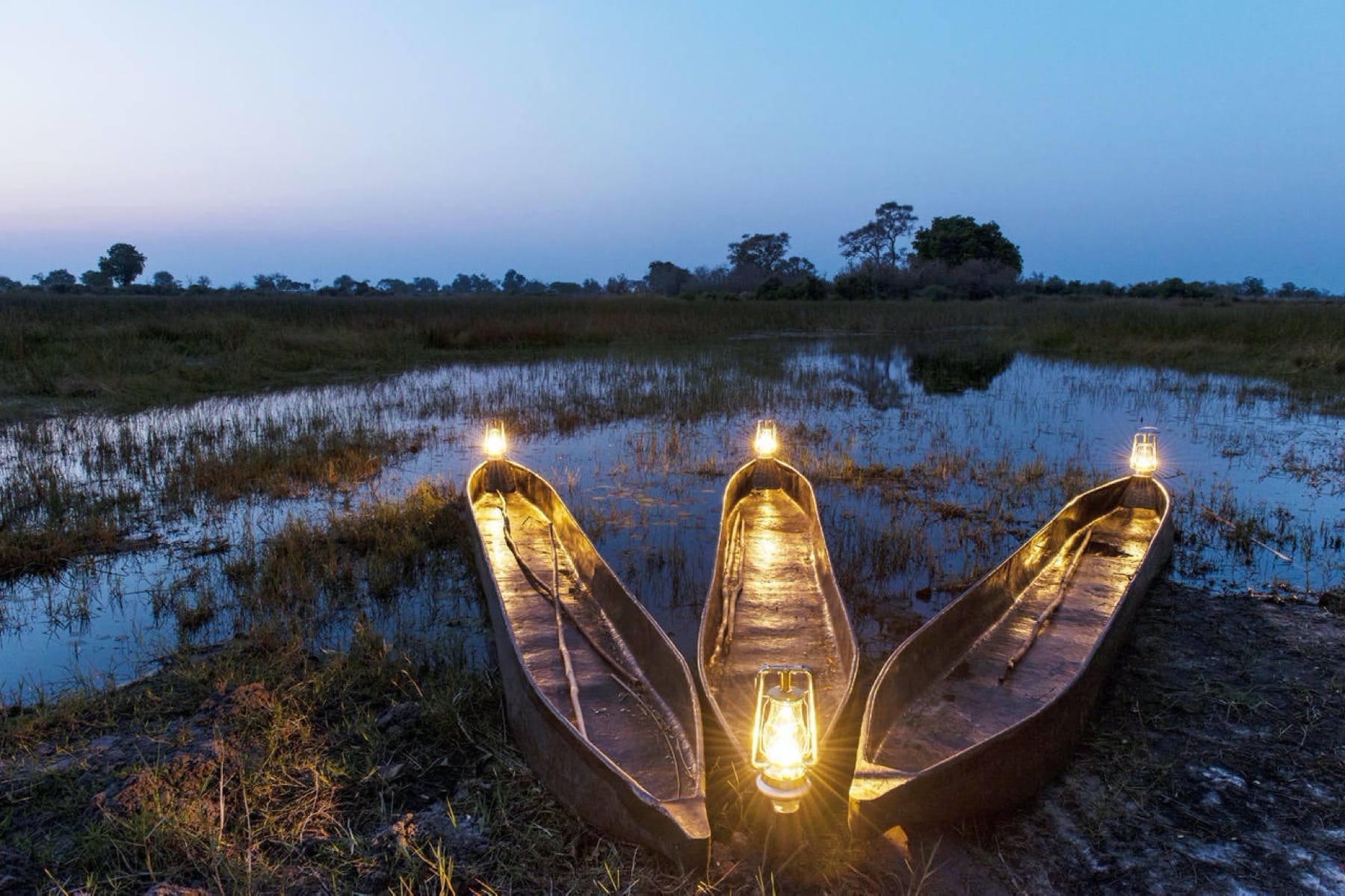 Highlights of the Okavango Delta

Highlights of the Okavango Delta

When to visit the Okavango Delta? 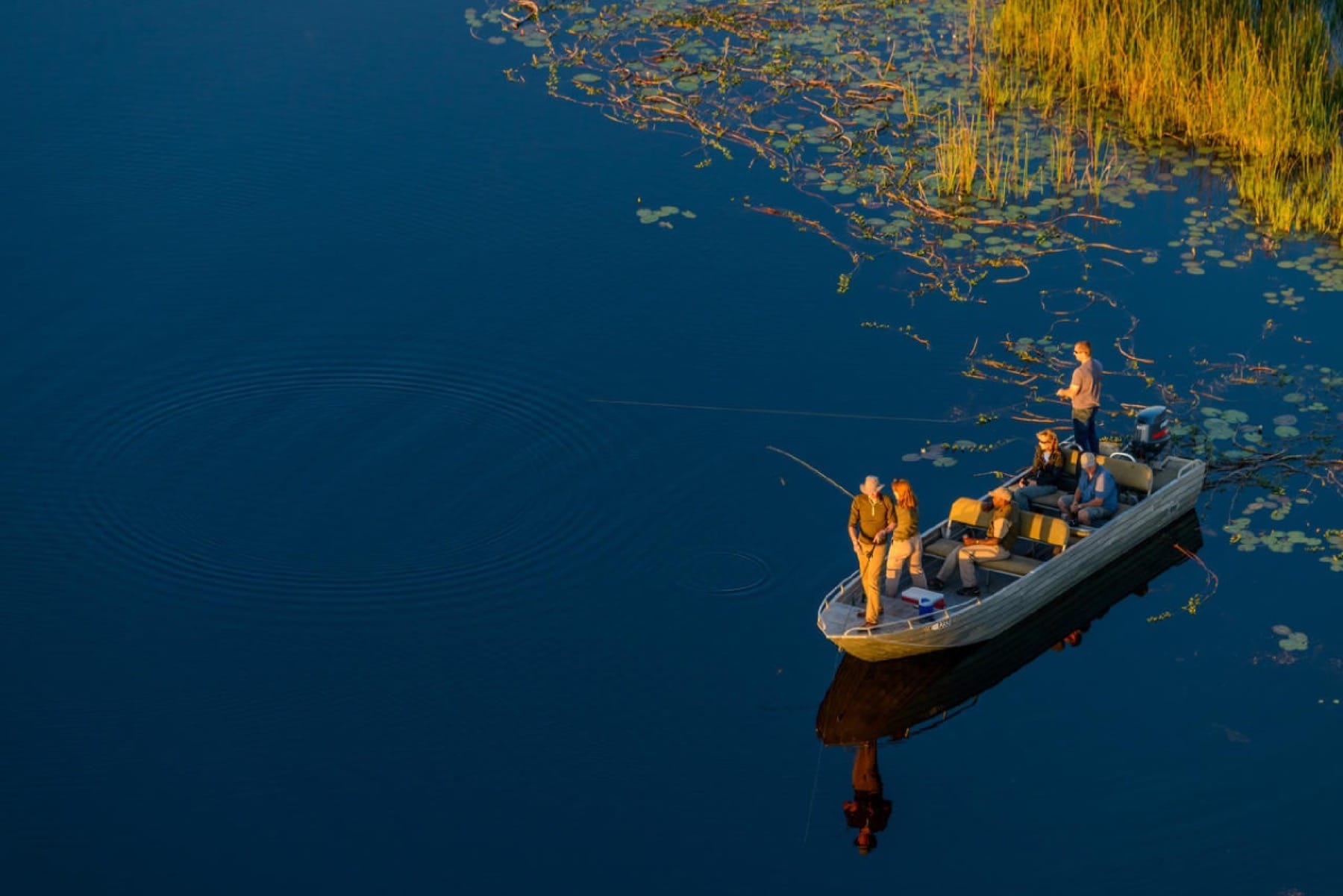 Why the Okavango Delta?

Imagine a vast wilderness of reeds and channels, of towering jackleberry and giant sausage trees. A place where bulrushes hide huge herds of buffalo, where elephants wallow and lions roam. This is the oasis of the Okavango Delta, the jewel in Botswana’s magnificent crown. A wildlife wonderland, it’s been called the last Eden of Africa – both a tribute to its splendour, and an indictment on the decline elsewhere. Its maze of swamps and lagoons form a unique refuge for vulnerable species, with hidden regions so remote that even the acutely threatened rhino can thrive. In the Okavango, you’ll find one of the richest and most bio diverse ecosystems on the continent, a conservation success story and arguably the best wildlife destination in the world…

Declared a UNESCO World Heritage Site in June 2014, the Okavango Delta is recognised for its unique annual flood. 11 trillion litres of water pour south down the Okavango River each year, a deluge from Angola that never reaches the sea. Instead it spreads southeast into the Kalahari interior saturating some 20,000km2 of sand. This is the last vestige of what was once an enormous inland lake, which over millennia has dried and gradually retreated, until only the immense Makgadikgadi Salt Pans remain.

The Okavango’s waters may no longer feed a lake, but they’re still critical to wildlife across the region. Central Botswana is the heart of the Kalahari, a semi-arid desert that sees very little rain. What makes the Delta particularly special is that its flooding coincides with the bone-dry winter months. As the summer rains fade in March and April, the waters begin their surge down the north-western ‘Panhandle’. As they hit the Delta, they gently fan out, and can take up to four months to percolate south to Maun. This seasonal flow provides a year-round source of water, a life-bringing reservoir for thousands of species of animals and plants.

The Okavango Delta is one of the world’s best wildlife regions, not just for its great game viewing, but as a general triumph in conservation. Much of its success is down to tireless, careful management and an overriding conviction that successes must be shared. Botswana has long operated a low-density tourism model, allowing a limited number of camps and lodges who then operate at a premium. This can quickly ramp up the cost of a safari to Botswana, but local communities are included and significant revenue is shared. In the Delta, you’ll find some of the world’s wildest and most spectacular game lodges and although prices can be high, it is the price of success. W hen you visit the Delta, the surrounding communities see value, which keeps poaching low and general encroachment at a minimum.

There are also ways to see the Delta which don’t involve luxury lodges – from houseboats on the Panhandle to Moremi and Khwai’s simple campsites. But wherever you go, park fees and tourism levies ensure that when you touch one of the world’s last great wilderness areas you know that in some small way you’re helping it survive.

Wildlife of the Okavango Delta

Official counts vary, but it’s generally thought that the Okavango Delta supports at least 2000 major species. Over half of these are plants, from giant hardwoods to waterlilies, with huge reed beds and grasslands and thick riverine forests. In the midst of the Delta you’ll find wild date and fan palms, clustering on low islands between the fig and waterberry trees. Take a look at a satellite image and you’ll see just what an anomaly this is – a lush hand of vegetation reaching south into the sand.

Up close in the channels, beneath the waving papyrus, painted reed frogs can be seen clinging to the stems. Around 30 amphibians have been recorded in the Delta plus 60-odd reptiles and around 70 species of fish. In fact, many visitors come especially for the fishing and ‘catch and release’ fishing lodges are popular along the Panhandle. The ferocious-looking tigerfish is the most sought after prize, plus bream and huge catfish, up to a metre-and-a-half in length.

The Okavango Delta never drains completely and the best way to experience it is by boat. Whether you’re fishing or not, a boat excursion is essential, either by flat bottomed motorboat or local dugout canoe. Called ‘mekoro’, these canoes are polled through the narrow waterways – an ideal way to discover the Delta’s 400-plus species of birds. Expert guides will skirt around the pods of hippos, as you silently soak in one of the world’s last great open-air aviaries

The Okavango Delta never drains completely and the best way to experience it is by boat. Whether you’re fishing or not, a boat excursion is essential, either by flat bottomed motorboat or local dugout canoe. Called ‘mekoro’, these canoes are polled through the narrow waterways – an ideal way to discover the Delta’s 400-plus species of birds. Expert guides will skirt around the pods of hippos, as you silently soak in one of the world’s last great open-air aviaries.

On the islands and floodplains Africa’s iconic megafauna awaits – over a third of the continent’s elephants move through the Delta each year. All of the Big Five are found here in good numbers, including black and white rhino which have been recently reintroduced. While predator sightings are never guaranteed, there are few places left where so many come together. Lion, leopard and cheetah are relatively common, as well as wild dog, hyena, jackal and the smaller wild cats. These prey on the many thousands of herbivores who are drawn to the Delta’s water and abundant food. The rare sitatunga and red lechwe are both adapted to the swamplands and you’ll also find the stunning roan and sable antelope with their scimitar-curved horns. 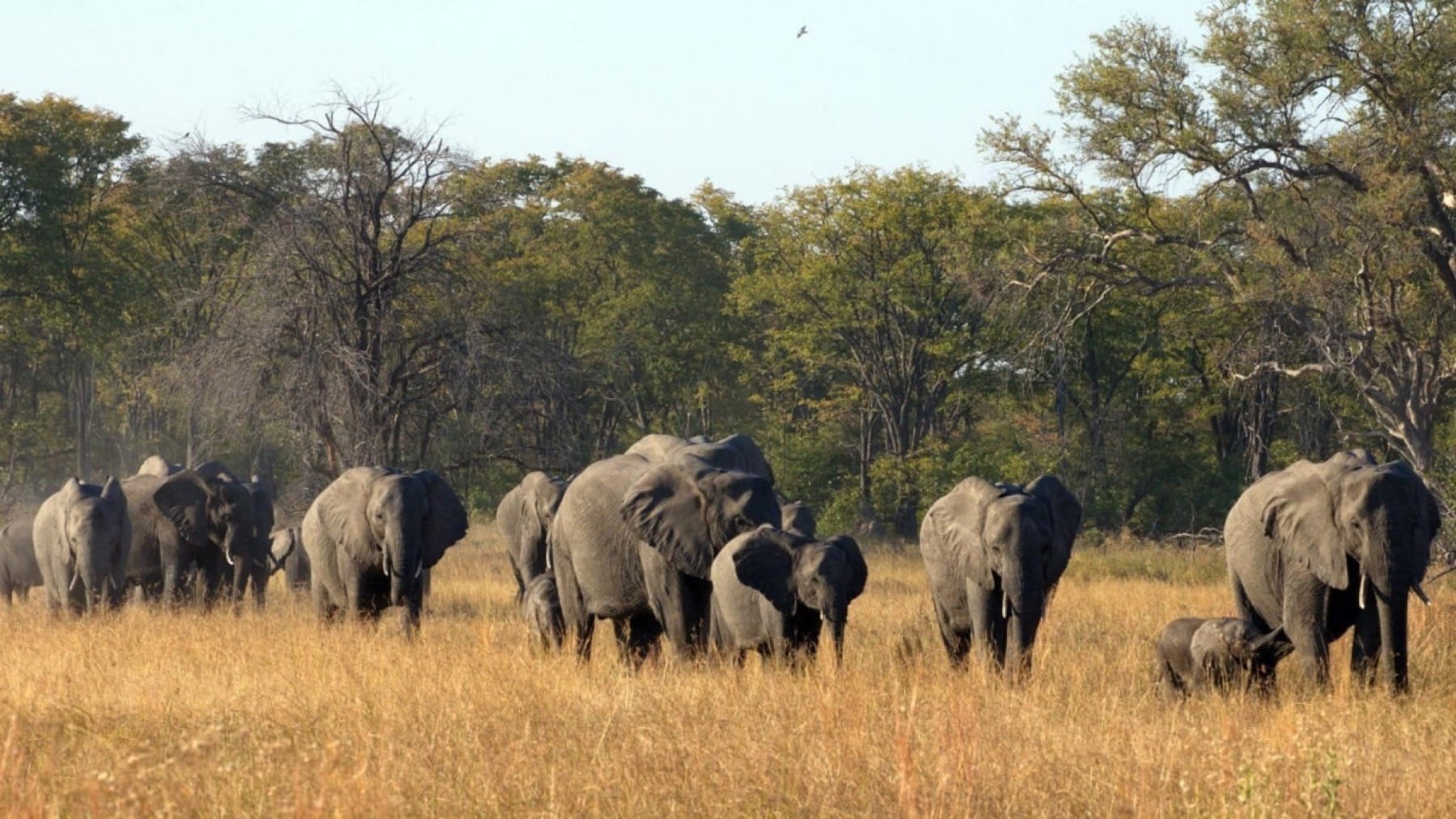 Budgeting for the Okavango Delta

From the Okavango Delta to the Chobe, this one-week journey is the perfect balance of wildlife and wilderness wonders...

This three-in-one journey will show you the majestic Victoria Falls, the massive elephant bulls of Chobe and the natural wonder that is the Okavango Delta...

Experience the remote wilderness of Botswana on a safari that offers you luxurious game viewing like no other....

Passage Through Southern Africa in a Luxury Train (10 days)

Weave your way through a safari medley that introduces you to the mighty Victoria Falls, a remote slice of the Okavango Delta and the African gems in between....

From desert to delta, this safari will show you the two stunning contrasts of beautiful Botswana...

Expedition to Zimbabwe and Botswana (8 days)

Explore the thundering Victoria Falls in Zimbabwe and the wildlife wonderland of the Okavango Delta...

The ideal safari to capture Botswana's unrivalled beauty and abundance of flora and fauna through the lens...

One week of wild camping in Botswana's Moremi Game Reserve, arguably one of the most beautiful areas in the Okavango Delta...

Explore the famous reserve that offers exceptional game viewing and sight the elusive Sitatunga antelope in the Okavango ...